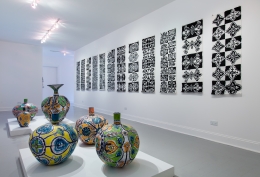 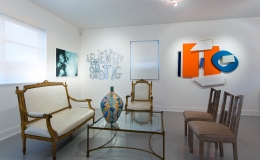 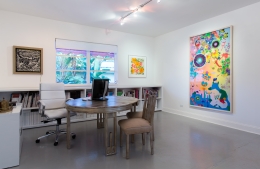 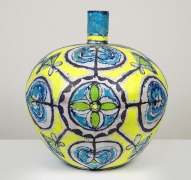 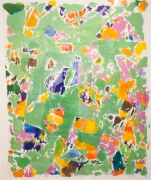 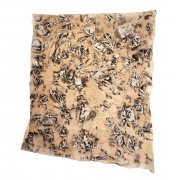 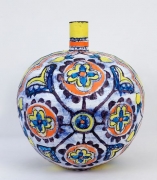 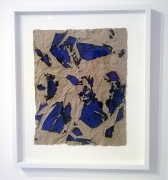 February 4, 2015 - Gavlak Palm Beach proudly presents A Sign of Eternal Beauty, an exhibition of new works by two accomplished and under-recognized artists, Florence Derive and Elisabeth Kley, showing together for the first time including painting, ceramics, and works on paper.  The title of the exhibition stems from Jack Pierson’s 2013 poem inspired by Derive’s paintings and persona and unites with Elisabeth Kley’s shared dramatic sense of gestural flourish employing shape and color motivated by natural forms.  The artists paired here, find voice separately represented by a grouping of entirely singular images and sculptures, while simultaneously engaged in a command of expression about repeat pattern and divergence, seasonal change, and the timelessness and power of voluptuous color.

Born in France and currently living in Paris, Florence Derive’s works on canvas, fibrous ecru, and métis (a mixture of linen and cotton) embrace the theatricality of nature as cyclical, suggesting the micro and macrocosmic experiences of natural change. Her work floats easily from the close-up fiery oranges and coolest blues of a single Iris in Summer Heat (Last Blue Iris), 2013 and then zooms back out to the full effect of landscape with Red Sun Effect on Sea, 2014 produced on linen and cotton opening the visual back up to the suggestive space of open landscape.

Her work asserts an energetic spirit in a painted, unstructured form unable to be tamed by the frame, at times emphasizing connections to the dynamic and tragic era of Baroque operatic compositions, with their feeling for female-centered voice declarations, for instance, in Dido and Aeneas by English composer Henry Purcell.  We see indirect suggestions to Spring via Botticelli with titles such as Primavera, as this most recent body of works situates subject matter in seasonal change, a theatrical occurrence on so many levels.  Her works often suggest the spatial dynamic of theater as well, referencing movement and growth through heightened color and texture, often presented in three parts, like the acts of a play.

Elisabeth Kley’s large scale ceramic vessels and painted scrolls of ink on paper presented here have an equal energy as form and line, structure and pattern share impact with intense, almost neon blazes of color.  Kley’s hanging paper scrolls encircle the gallery.  They command presence as all-over compositions of vertical space with their positive-negative ornamental forms, almost Celtic or evocative of the illustrations of Aubrey Beardsley in their combination of ancient form and pattern fused with the floral tendrils of stark black and white figure-ground reversals.

Rounding out the space, Kley’s highly individuated urns and bottles range in scale from 20 inches to roughly 35 inches high, soaring and signaling Kley as an impresario of the recently re-discovered ceramics renaissance. Transcending late twentieth-century limitations placed upon ceramics and reaching back to a grand history for the medium coupled with ritualized value and socio-cultural importance, Kley’s vases are at the center of this cerama-chic blossoming of the medium, edging significantly past its outsider-femme connotations. Her often multi-tiered vases, bottles, urns, and even birdhouses, which ironically suggest the whimsical line quality at times of Bauhaus master teacher Paul Klee or the late 1960s drawings of Pierre Alechinsky, have been discussed in relation to architectural form. Yet Kley’s daring designs have a spirited functionality that can be chimerical. The dancing forms of stained glass come to mind as chalky-dark outlines intermingle with Italianate hues on glazed earthenware, suggesting an internally generated quality of light for each of Kley’s unique vessels, a luminosity that seems to be synonymous with its ceramic structure.

With a wildly diverse background as an artist, an art writer for Artnews, Art & Auction, Parkett and others, and as a teacher to senior citizens in The Bronx, Elisabeth Kley has been awarded a Pollock-Krasner Foundation Grant and has been nominated for The Joan Mitchell Foundation Fellowship and the Anonymous Was a Woman Award, among others. Her work has been most recently exhibited at NADA Art Fair 2014, GAVLAK Palm Beach 2013, John Tevis Gallery in Paris 2012, and Haunch of Venison in New York 2012.  Her work was recently featured in Jack Pierson’s publication “Tomorrow’s Man 2.”

Florence Derive studied at The École Nationale Supérieure in Roubaix and in Paris.  With cited influences in Color Field painting, Derive moves fluidly between her projects working as a decorative artist, actor, painter, and professor of textile design.  Her work has been exhibited at Galerie Thaddaeus Ropac 2014, GAVLAK Palm Beach 2013, Galerie Canal Pictures & Art in Paris 2009, and is in private collections in France, Monaco, Spain, and New York.  Her work was featured in Candy Magazine in 2013.

Gavlak Gallery would like to thank Jack Pierson and Rob Wynne for introducing us to the work of Florence Derive and Elizabeth Kley, respectively. Both Pierson and Wynne will have works on view during “A Sign of Eternal Beauty.”