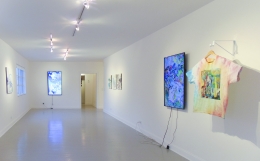 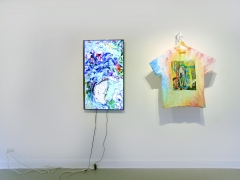 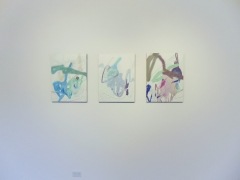 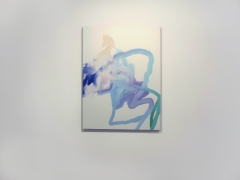 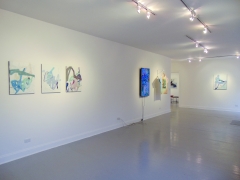 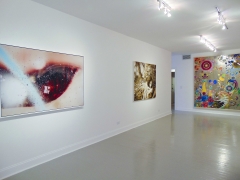 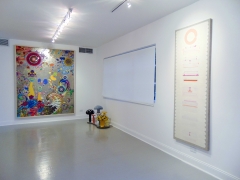 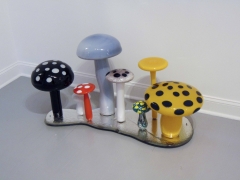 " I had an old TV in my bedroom. It was left over from a group show I did as a monitor for a piece of video art that I made. The other day it rained really hard and my roof leaked and the water broke the TV.
No paint, no paintings. " – Michael Manning

No Rain, No Rainbows came from a slogan Manning found on a T-shirt in a Goodwill store. Intrigued by the way in which the slogan was true but also nonsensical, Manning decided to take it as inspiration for his show, furthering his interest in exploring dichotomies between two opposing ideas. “A lot of the work I make, and in particular the work in this show, is meant to confuse dichotomies of virtual vs. real, online vs. offline, analog vs. digital etc. etc.,” said Manning. “By inhabiting the form of traditional art objects the paintings exist as weird representations of themselves. They aren't really digital paintings and they aren't really traditional paintings.”

To create each painting, Manning makes the work in two parts. He first creates a black, 3D printed ABS plastic layer, which creates the texture for the work. He then creates a UV-cured print of the image, which covers the texture and creates the color in the work. The process itself is visible in four of the smaller works, in which the image used to create the texture layer does not match the color that has been printed over it. With these works, the brush strokes, palette smears, and other textural elements do not align with the color, further underscoring Manning’s interest in creating disparity within a single work.

Also on view will be two video works that Manning describes as never settling “as one thing or another.” The videos featured are animations of images that have become abstracted, appearing to be nearly liquid in form. As the video progresses the works move back and forth, growing and collapsing on themselves, over and over again. Resisting definition, the forms glide across the screen in a constant state of mutability.  Together, the works explore Manning’s ongoing interest in joining two opposing ideas, and creating consonance through the melding of two seemingly disparate, yet in tune concepts.

Manning has had recent solo exhibitions at CURA, Rome, Sommer Contemporary, Tel Aviv, Bill Brady Gallery, Kansas City, and Carl Kostyal, Stockholm. He has also been included in group exhibitions at notable institutions including the Museum of Contemporary Art, Los Angeles and Eyebeam Center for the Arts, New York. He lives and works in Los Angeles.