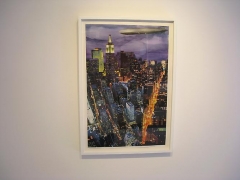 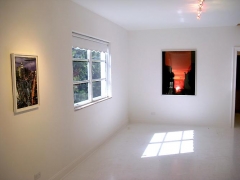 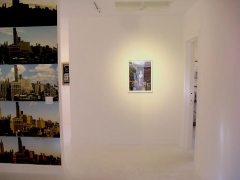 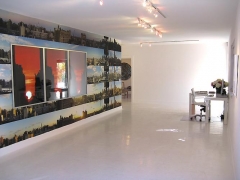 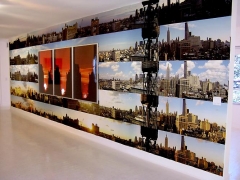 Gavlak Gallery is pleased to present two solo exhibitions of new work by the Los Angeles based artist Lisa Anne Auerbach, and New York based T.J. Wilcox. Lisa and T.J. share a long history dating back to the mid 90's, where both attended the MFA program at Art Center College of Art and Design in Pasadena, California. While the two artists work in different media, Wilcox in film and collage and Auerbach in photography, knitting and publications, there is a similar sensibility in their approach to art-making that clearly comes from the teachers under which both studied closely. Mike Kelley, Stephen Prina and Liz Larner are just a few of the instructors that greatly influenced them. A sweater presented here ("More Than Love Hours," 2012) by Auerbach was knitted for an exhibition put on by former students as an homage to Mike Kelley after his recent and untimely death, and is a poignant homage to these artists' shared history.

T.J. Wilcox makes super 8 films transferred to video, 16 mm film projections, collages and installations of famous people and their glamorous and sometimes harrowing and dramatic stories. Fact meets fiction (or sometimes the artist's own fantasy of history) in beautifully haunting portraits of the famous Marie Antoinette, Marlene Dietrich, or Czar Nicholas of Russia. These portraits continue in his work with the not so famous, such as his close friends, the superintendent of his studio building and his beloved French Bulldog. Like Warhol, stars of the silver screen, celebrities, Queens both reigning and in drag, as well as people in the artist's everyday life are given the same Wilcox filmic treatment. The collaged films are often romantic and decadent in their subjects and subject matter, and his stunningly beautiful vignettes often blur biography and autobiography and embrace the romantic history and escapism of cinema.

For his second exhibition at Gavlak Gallery, Wilcox will feature a triptych of duratrans photographic stills on light boxes that will be installed over movie poster size images of the New York skyline wallpapering one wall of the gallery, and two new collages. All of the imagery is taken from the films currently on view in his Whitney Museum of American Art exhibition "Up in The Air". This panoramic film depicting the 360 degree skyline of Manhattan from his penthouse studio in Union Square is partially and briefly disrupted periodically by six short films including "Manhattanhenge" and "Futura" from which his exhibition at Gavlak Gallery is based.