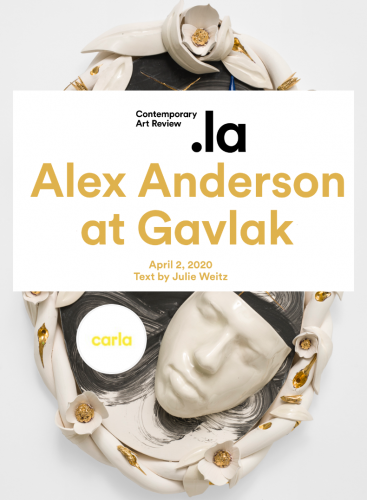 Alex Anderson’s exhibition of 21 ceramic sculptures, dramatically lit and arranged on pink pedestals—with additional low reliefs hanging from the gallery’s white walls—is an oblique counter-narrative to the conventions of European decorative arts. At first glance, one might mistake the glazed earthenware for porcelain, or the elaborate ornamentation for a shallow embrace of Western aesthetics. Coyishly deflecting such presumptions, Anderson’s exhibition title, Little Black Boy Makes Imperial Porcelains, is a tongue-in-cheek description of the artist and his practice. By interweaving anthropomorphic allegory, proficient craftsmanship, and sly wordplay in his titles, Anderson spotlights his experience as a gay, Asian-African American, decidedly de-flaking the crustiness of the Western ceramic tradition.

In the work Losing Face (2019), a white mask molded from the artist’s face (reminiscent of Roman funerary masks) slips down the surface of a framed, mirror-shaped relief to reveal a frowning character in blackface. For this work, Anderson painted exaggerated lips, stunned eyes, and a black background using a loose, brushy style adapted from East Asian painting. As with most every work in the show, he counterbalances baroque decorative motifs—like flower petals and leaves—with three-dimensional emojis that adorn his sculptures as digital punctuations. In this case, a large drop of blue sweat hangs from the blackface character’s forehead, suggesting internal anxiety about being reduced to a stereotype. In Disposable Light (2020), a white hand grasps the end of a matchstick, which at its tip displays a drooling blackface character with x_x eyes and a gold-lustered fire emoji blazed into its head. The sculpture evokes the terror of being easily burned by the hands of white power, if perhaps a bit directly.

Anderson’s skill for embellishing historical symbols of racial violence with imitative elegance and a baroque sensibility, along with the pictorial language of contemporary emojis, is uncomfortably tantalizing. In Pearanoia (2019), the disembodied white hand reappears, this time grasping for a small, sweating black pear hanging from a white serpentine branch that oozes gold droplets. Like Nina Simone comparing the scent of magnolia to that of burning flesh, Anderson’s sculptures resonate most because of their masterful absurdity. They employ imperial aesthetics to upstage power at its most violent.

Read on contemporaryartreview.la
Back To Top