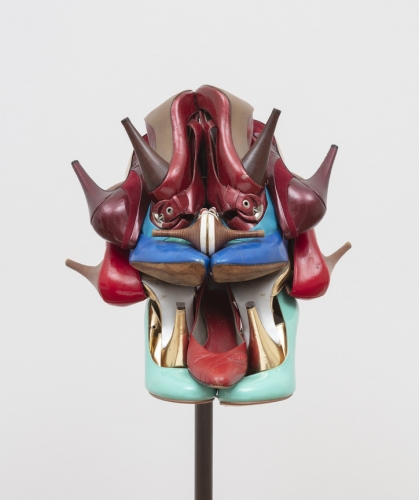 Willie Cole’s shoe sculptures are like warped, grinning Rubik’s cubes, complex goblins that feel like guardians of a wizardly secret—a password lies on the tips of their tongues, one that could open a gateway to a fabulous realm or, conversely, a trapdoor to a chamber deep below the gallery floor, where they keep curious gawkers who ask too many questions.

To complement and enhance the gargoyles are pictures where the masks become the faces on elegantly posed women, as well as a splaying round wall sculpture exposing only the soles of the feet—a medallion that feels like the aforementioned gateway. In the opening of the show is a brilliant figurative bronze sculpture whose basic forms are high heel shoes, but whose composite effect is that of a partly graceful, partly leering, partly animalistic female form—a fantasy that high heels have always made it their business to promote.

office caught up with the artist to discuss the wondrous possibilities of footwear, art, and puzzles.

Tell me about your work.

My work in general, since about 1989 or 90, has been about taking objects that clearly from Western culture and recasting them in a tribal narrative, often with things that look African art, but because of the idea of tribal, they start to look like other cultures as well, especially Mexico and Asia. In my mind or the back of my imagination I proceed as if I’m trying to extract the spirit from the original object, so I don’t work with a sketch or a plan, I just play with them for hours until something emerges. So in the case of the shoe masks, I feel that each shoe had the personality and the history of the person who wore them—they’re all used shoes, gently used I should say—and they kind of make their own personality, I just have to remain open to that and put them together.

Another aspect of that same work is that I’m very interested in making work that looks like they come from the past, the present, and the future—I call that collapsed time, where everything comes into a single point called the now. And that makes them look very futuristic, but they might be put together in such a way that reflects a more ancient tradition. I’m also interested in multiplying objects, so I do a lot of work with water bottles, which is the probably the most exact on my formula for analysis—I take a single water bottle and multiply it, so now it’s a thousand or three thousand water bottles, and it becomes something else. In that case, I tell myself that I’m doing what nature does by taking a single molecule and multiplying it to make something completely new.

I didn’t even think of it as being tribal, but now that you say that it makes sense. I just saw the shoe faces and thought they were silly and refreshing.

Yeah, they just popped out. In the front of the gallery, I have a bronze, full-bodied figure. I think of them all as female because the shoes were females, so there’s a female energy that I’m extracting from these objects.

Yeah, it’s amazing what you were able to create—it doesn’t seem forced at all, either. Did you set out to make faces or a body, or is that just how it ended up? That’s just what the shoes spoke to you?

In the beginning of the process, back in the late 80s or 90s I had a show in Philadelphia, and I wanted to make a bodysuit—my friend had given my five pairs of his sneakers and I needed so many more to cover the entire bodysuit, these were high-top, quality sneakers, I wanted the wearer to bounce up and down and see the shoes kick. So I went to a thrift store and I saw the high-heeled shoes. So, right away I switched from sneakers to high heels. I didn’t know what I was going to make with them, but I knew they had great potential because they had great color, they had great shape, great history, great symbolism. I collected probably around 100 pairs at that time, and I played with them for about a month or two before I was able to recognize that the stiletto heel could be like a fang. And that led to the face aspect of it.

Now, at that time I made a chair out of high-heeled shoes because of Imelda Marcos, she had so many shoes, she was the wife of the President of the Philippines, so I made a throne for Imelda out of high-heeled shoes. And I made two faces, not masks for the wall but free-standing faces, and then many years went by, but in 2005 I received a fellowship at the University of Georgia—I was on campus for four years, they gave me a stipend, etc, but I didn’t take any art supplies with me, not even paintbrushes. So while sitting at my empty studio there, I said, ‘Maybe I’ll take up the shoes again.’ So I went to the local thrift store and told them that I wanted to make things out of shoes and that I would buy every shoe they had for fifty cents a pound, and they gave me like a million shoes, and the University of Georgia paid for them all at fifty cents a pound. So I continued with the shoes in 2005 with no real intention in mind. By the time this show came along, I knew I could make faces out of shoes—so I intended to make faces, I just didn’t know what the faces would look like.

I would go into my studio and be confronted by rows and rows and tables and table of shoes, and I don’t know what my intention is going to be, but I know I’m going to be there for three hours playing with the shoes. And some shoes suggest, perhaps a very long heal or a platform shoe might suggest a body, where as a pump might suggest a nose or an ear. So I let the shoes lead me to the final result.

It’s interesting that it started out as sneakers and became high heels, because I feel like right now a lot of people who used to wear high heels are now wearing sneakers instead. You said the high heel has a lot of symbolism and power, what do you think those are?

The high heel for some women becomes a power shoe. This morning, I was at my fiancé’s house and she gets up to go to work and I could hear her shoes coming down the hallway. It’s almost like the drum announcing the coming of the king or queen. Even today with her colleagues it’s like she can say she’s high because she’s wearing the high-heeled shoes. Those are some of the more positive symbolisms of the high-heeled shoe, but it also has the opposite suggestions as well. It could inhibit one’s ability to run. And nowadays, with the branding and the depending on the maker of the shoe, it becomes a status symbol related to economics, like, ‘Oh, she’s wearing Jimmy Choo,’ or whatever. And the designers sometimes do things to the shoes to suggest power or domination.

Do you think you’re playing into that with your tribal faces?

Well I’m letting the shoe lead me. If the shoe is pointing that way, I go that way. I’m pulling out the spirit of the shoe, or the wearer of the shoe. I’m not really dictating anything. When I was a kid, I played with Erector Sets and Tinkertoys and things you put together, and these were essentially the same thing—it’s like a puzzle but the box has no picture on it. I know there’s something in there, so I’m just looking for what that is.

I can feel that from the sculptures. They look like puzzles almost.

Yeah, I really move them around until they fit perfectly on their own. I don’t cut them or change them in any way. So if two fit together and suggest something, I go with that. I work on several at once, so I’m able to just move around the room and if it doesn’t fit here, okay, move on to the next one. Another thing that attracted me to shoes, was in high school my major was fashion design, so that helped me to appreciate the beauty of the shoes as well.

It’s funny about shoes too, because they’re definitely fabulous but of the articles of clothing that you wear they’re kind of the grossest. That’s the thing about shoes.

The good thing is that women will buy shoes and wear them twice with an outfit, and then not wear them a lot. So when I went to buy shoes, I looked for the ones that had been worn the least. I live in New Jersey, and my local thrift store gets new shoes from one of the chain stores that gives them to the thrift store—so I was able to buy a lot of new shoes as well for a really low price.

But they are the foundation. They’re close to the Earth. And they have memory. I can see the shoe take the shape of the foot that’s in it sometimes. So all those things are feeding my choices. Also, I’m not the first artist to use the shoe. Dalí made a hat out of a shoe. It’s almost like a readymade with a history. I make a lot of pieces out of steam irons, and Man Ray did the famous piece with the flatiron.

'Bella Figura' is on view at Alexander and Bonin through June 22nd, 2019. All images courtesy the gallery. Lead image: 'Ashley Bikerton'.