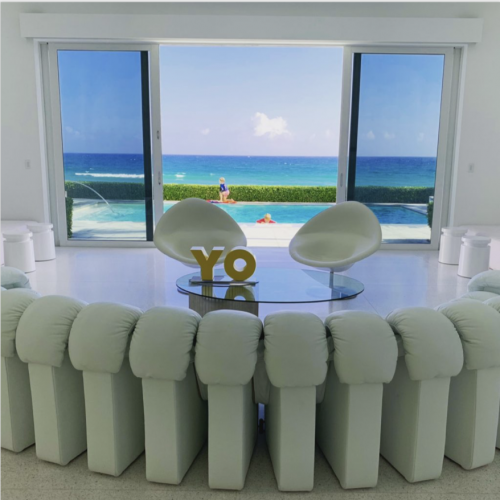 Provocative. Forward-thinking. Progressive. Those aren’t exactly the buzzwords that come to mind when one considers ultra-rich Palm Beach, Florida, home to President Donald Trump’s Mar-a-Lago resort. But art dealer Sarah Gavlak is looking to change that. Ahead of Miami Art Week, Gavlak held the first-ever New Wave Art Wknd, showcasing the city’s contemporary art and emphasizing the importance of promoting work by women and immigrant artists.

“There’s all this talk about living in bubbles,” said curator Isolde Brielmaier, who attended the events in Palm Beach. Instead of preaching to the choir in New York, why not take this conversation to a place where it will necessarily be more disruptive?

Gavlak opened her eponymous gallery in Palm Beach back in 2005 after working in New York at Gagosian Gallery, where she couldn’t help but notice all the art being shipped to Palm Beach and neighboring West Palm Beach. “I was like, ‘what is going on down there?’ I came to visit, and I was like, ‘why isn’t there a gallery here?'” she recalled.

Palm Beach’s collector base hails from across the Northeast—”no one is from here” was a refrain I heard throughout the weekend —with many residents still maintaining homes in New York City and the Hamptons. The New York collector Beth Rudin DeWoody, for one, debuted her private art facility the Bunker (https://news.artnet.com/exhibitions/beth-rudin-dewoody-bunker-1196573) in Palm Beach just ahead of Art Basel in Miami Beach in 2017.

But even though Gavlak is a stalwart champion of Palm Beach, she’s aware of its less-than-hip reputation.

A new wave on the beach?

Gavlak deliberately chose to name the weekend-long event without an explicit mention of Palm Beach. Instead, New Wave Art Weekend references her favorite kind of music and hints at a burgeoning progressive art scene as well as the “new wave” of refugees currently being forced from their homes around the world.

With New Wave set to be an annual event—Christie’s auction house is a sponsor—Gavlak plans to unveil a new artist residency program in Palm Beach specifically for immigrants. She sees it as a mutually beneficial arrangement: the city gets a boost of diversity and the artists get to meet top collectors such as DeWoody, Amy Phelan, Burt Minkoff, Jane Holzer, Irene Karp, and Lisa Perry—all of whom are on the New Wave advisory board.

“The artists who are coming here, they are going to have seats at tables that they would not have access to in other places,” Gavlak said.

Immigration is a personal issue for the dealer, who has long represented Jose Alvarez, an artist who faced deportation not long ago. A gay man who feared for his life in his native Venezuela, Alvarez had overstayed his visa in the US, trading his birth name, David Orangel Peña Arteaga, for the name and social security number of someone else. Decades later, in 2011, he was arrested for passport fraud.

“By pleading guilty, he faced deportation,” said Gavlak, who testified on Alvarez’s behalf in court. “It was very emotional.”

Though the judge agreed to time served and probation, Alvarez was still picked up by Immigration and Customs Enforcement agents after the trial and spent two months in Miami’s Krome detention center. He was eventually released and he married his longtime partner, James Randi, a stage magician known as the Amazing Randi.

The artist is friends with Gavlak and DeWoody, who owns one of Alvarez’s large-scale, colorful, collaged paintings, embellished with feathers on a shimmering surface made from thin layers of mica. DeWoody is also collaborating with the Boca Museum to produce a book of portrait drawings Alvarez made of his fellow Krome detainees.

Having it and flaunting it

But this is still Palm Beach and there were still plenty conspicuous displays of wealth over the weekend. Miami classic car dealer We Are Curated (http://wearecurated.com/) parked two of their vehicles outside during New Wave’s visit to the home of Irene and Jim Karp, transplants from Louisville, Kentucky, who began buying art to fill the walls of their Spanish-style home. One of the vehicles, a red Lamborghini, was a one-of-a-kind model originally given to Eddie Van Halen as a birthday gift.

Then, in the interior courtyard, next to an impossibly picturesque swimming pool, there was a gelato cart courtesy of trendy restaurant Sant Ambroeus, which opened a Palm Beach outpost in 2017.

Meanwhile, Lisa Perry’s home was even more jaw-dropping, the living room at the entrance opening directly on to the backyard’s crystalline pool and the ocean just beyond. A small Oy/Yo sculpture by Deborah Kass sat on the table. The family bought the property—which is directly across the street from Mar-a-Lago—for $11 million in 2011, according to the Palm Beach Daily News(https://www.palmbeachdailynews.com/business/real-estate/couple-pays-million-for-palm-beach-house-renovation- planned/bcrwmU5mMqaNlRRhkpXtJO/). A longtime Hillary Clinton supporter, Perry campaigned against her neighbor in 2016.

In fact, Palm Beach County voted for Clinton in 56.5 percent to Trump’s 41.2 percent in 2016, but there are definitely Republicans among the area’s art cognoscenti. When it comes to politics, “we all kind of keep our mouths shut at dinner parties,” admitted Irene Karp. (Republican tax policies, which typically benefit the rich, were cited as a reason for conservatism in the city.)

Colleen Kosoy, a friend of Gavlak’s, went further: “If you badmouth Trump in this town, you be better be careful—they may have an AK-47!”

New Wave’s hope is that art and artists can help communicate ideas that Palm Beach’s more conservative denizens might not otherwise be receptive to hearing. In the right conditions, an art exhibition can bring different communities together and hopefully foster mutual understanding.

In a panel discussion on inclusion in the art world, artist Sanford Biggers gave the example of a series of video works he made that featured Harlem breakdancers. When he showed the work, he invited the dancers to the opening, where they mixed and mingled with the downtown art crowd. “if you don’t broaden the audience you can’t broaden the art world statistics,” he said.

Part of the problem, however, is that not everyone in the art world is interested in attending this kind of event. “There would be a much bigger audience if this was a panel about Warhol and the market,” said dealer Alexander Gray after the talk.

The Culture Lab, a public art venue in a former Macy’s. Photo by Sarah Cascone.

For all the talk of inclusion it’s worth noting that most Palm Beach residents can’t visit the homes of the Karps or the Perrys, and the Bunker isn’t open to the public (though DeWoody will soon partner with local schools to arrange visits for children). Supporting a diverse group of artist is only half the equation.

That’s why it was refreshing to see the latest project from Art Production Fund founders Yvonne Force Villareal and Doreen Remen, an exhibition that lives in a vacant Macy’s department store in West Palm Beach’s shopping center. The unconventional space, which they created with their consultancy Culture Corps, is called Culture Lab and still bears the vestiges of its retail past.

During our visit, a young boy stared in wonder at Ivan Navarro’s seemingly endless neon-filled shipping containers—an illusion created with a one-way mirror—and asked to be hoisted up into the hammocks that Ioanna Pantazopoulou created for her colorful mixed media work T.E.E. (The Exotic Express). Seeing him interact with the work in real life gave me hope that Gavlak is right: perhaps a new wave is coming.