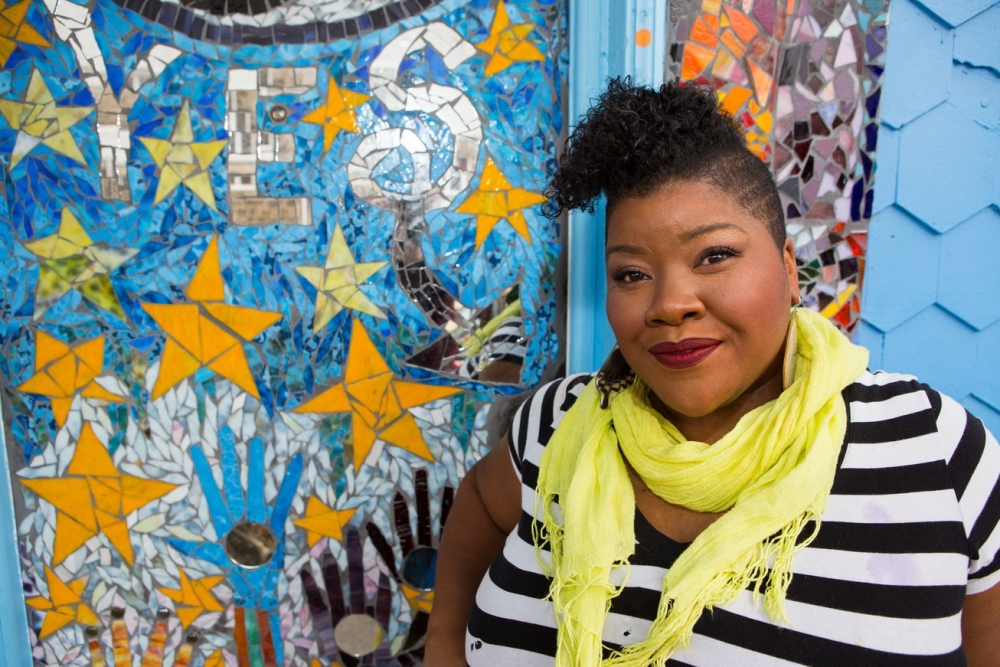 THE CRYSTAL BRIDGES MUSEUM of American Art announced the 2018 Don Tyson Prize has been awarded to visual and performance artist Vanessa L. German. The $200,000 biannual prize recognizes an individual artist or organization for exceptional achievement in American art. German was selected for “pushing boundaries and taking risks in the field of American art, as well as positively impacting her community through art experiences.”

Yesterday, officials presented the award in person, visiting German in the Homewood neighborhood of Pittsburgh, where she lives, works, and established the Art House, a grassroots community art center.

A painter, sculptor, spoken-word poet and activist, German’s practice is community driven. She is recognized for her mixed-media “power figures.” Composed of vintage and found objects, the elaborate and imaginative sculptures are centered around black memorabilia-style doll figures. She makes life-sized versions and smaller- scale works suitable for display on a pedestal or table.

The works probe issues of violence and racism and are animated with clever and idiosyncratic titles such as “Reality Check: To Call the Police Use this Phone,” which includes a spiral cord and receiver from a 20th century dial phone, and “Souvenir of Our Trip,” which features a slave ship balanced on the head of the figure.

Vanessa German is recognized for her mixed-media “power figures.” Composed of vintage and found objects, the elaborate and imaginative sculptures probe issues of violence and racism and are animated with clever titles...

German, 42, often created her sculptures on her porch, where neighborhood children began to observe what she was doing and became curious about her work and all of the tools and materials spread around her work space. Engaging with them led to her establishing the Art House, designed as a safe space for art making. A bright blue house embellished with mosaic tiles, the Art House is a work of art with a magical presence in a historically black neighborhood that has experienced generational challenges with poverty and gun violence. German hosts local children, women and families to explore the creative and healing possibilities of art making.

“The Don Tyson Prize recognizes Vanessa for changing the way we experience art and exploring transformation through art and advocacy,” John Tyson, chairman of Tysons Foods, said in the announcement. “The impact she’s had and the work she’ll continue to do honors the memory of my father Don, for whom the prize is named. Like

Vanessa, he believed in the power of art and in the American spirit.”

“The Don Tyson Prize recognizes Vanessa for changing the way we experience art and exploring transformation through art and advocacy.” — John Tyson

GERMAN’S PRACTICE has been recognized widely and her work is represented in many collections. Recent solo exhibitions were presented at the Everson Museum of Art in Syracuse, N.Y.; Pavel Zoubok Gallery in New York City; and the Wadsworth Atheneum Museum of Art in Hartford, Conn., where she was in residence in summer 2016.

Sculptures by German were featured in the group exhibition “State of the Art: Discovering American Art Now” (2014) at Crystal Bridges. Three of her works are in the museum’s collection. The trio is currently on view in the museum’s 1940s to Now gallery. Another sculpture, “Reality Check: To Call the Police Use this Phone,” was acquired from the artist by Peggy Cooper Cafritz (1947-2018), whose collection was recently donated to the Studio Museum in Harlem.

In 2017, German received the Jacob Lawrence Award from the American Academy of Arts and Letters, and she is a 2018 United States Artists Fellow. When the executive director of the Crystal Bridges called to inform her she had won the Tyson Prize, she said it was an honor. “Wow that’s amazing. That’s really humbling,” German said, recalling her reaction toWESA, the local NPR affiliate. She added: “And then he said it comes with a monetary prize. ...And then when he told me the amount that it was, I cried.”

The artist has already determined that she will use some of the prize money to support her “Museum of Resilience,” a project embedded within the Art House. German envisions the museum as “a public place that draws on the concept of the Art House to celebrate the transformative power of creativity in the lives of black women, trans women, single mothers, and their children, while simultaneously resisting the violence of gentrification.”

The Tyson Prize is endowed by the Tyson family and Tyson Foods, Inc., through the Crystal Bridges Museum in Bentonville, Ark. German was selected through a nomination process. A jury of museum peers and art historians reviewed 85 candidates and chose German.

The inaugural prize was awarded in 2016 to the Smithsonian’s Archives of American Art in Washington D.C. German is the second recipient. Next year, she is participating in the Distinguished Speakers Series at Crystal Bridges, where she is giving a talk on April 24, 2019. In the meantime, she said she is grateful for the unexpected support.

“Art has been transformational in my life, particularly in confronting and contending with the dimensional violence of racism,” German said.

“I create art works, experiences and spaces of social healing, connection, and expression This award not only allows me to deepen my studio practice and anchor the Art House, but it also provides an opportunity to pay it forward and continue the work of my mother, Sandra German, who affirmed the lives, activism and creative power of those around her.” CT

WATCH VIDEO of Vanessa L. German working with students to create poems and power figures during her summer 2016 residency at the Wadsworth Atheneum Museum of Art

The Wadsworth Atheneum Museum of Art produced an illustrated brochure to accompany “Vanessa German / MATRIX 174: i come to do a violence to the lie” (June 9–Sept. 4, 2016), the artist’s solo exhibition at the Hartford, Conn., institution.