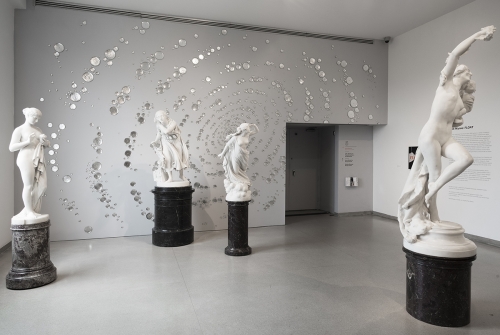 In his intriguing, often provocative, interpolated show at the Brooklyn Museum, Rob Wynne builds, reflects, and—more literally—reflects on connections in American art. In doing so he manages to intervene in the course of art history itself. He pulls at the museum's paintings and sculptures and activates them through light and language, transmuting the collection by means of his signature hand-poured, mirrored glass.

Often wry, even satiric, Wynne extracts unexpected meanings from the works in question. Like any visitor to the museum, he sees things through his own personality, and in doing so, alters messages and interprets them, leading them properly or reluctantly into the present. Thus, his work is a reading of a past that inevitably becomes a mirror of his own consciousness.

Walking through the galleries and being surprised by Wynne's interjections feels like a random journey through time, beginning in the brilliant fifth-floor light-flooded entry space which houses the installation, Extra Life (2018), with four elegant 19th-century neo-classical white marble statues, including Randolph Rogers’s The Lost Pleiad (1874 – 75), which stands for one of the seven stars in the Pleiad constellation. In the next room, the installation titled Masquerade (2014) is a humorous elusively colored, almost decadent-toned blue-green-wine-colored glass rendering in bubble-shaped letters of the word “masquerade.” The word appears like a disguise embellishing stiffly posed portraits by Samuel Waldo of Mr. and Mrs. David Leavitt (ca. 1820 – 25). Might this allude to the sitters’ characters or simply to their historical situation? The fact that the entire ensemble—a red period sofa, the portraits, and Wynne's word—is reflected and turned upside down in a concave mirror on a nearby wall confirms the idea that meaning derives from the viewer's gaze.

Particularly striking is Wynne’s witty mirrored take on vanity. In I Saw Myself See Myself (2018), a title alluding to DADA ceramist Beatrice Wood’s autobiography, the concave mirror is posed beneath the reflective words above Kem Weber’s Modernist chrome Vanity with Mirror (1934). The mirror’s distortion reaches out to viewers, and in the process, inverts their perception of the world, and Wood’s place in it, over the course of 97 years.

“My life is full of mistakes,” Woods once said in an interview. “They’re like pebbles that make a good road.” The words could be seen to echo Wynne’s glass-pocked pathways. In one of her widely quoted and timely observations she commented, “I think maybe all women, if they just had a chance, would be romantic and believe in love and not sex. And men believe in sex and not love.” Is this an inversion or simply a metaphysical crossroad later generations redefine for themselves?

One absolutely charming detail here is a gold snake in the jewelry vitrine. A prefect copy of a pre-Columbian artifact. What is amazing is how such a piece could resonate today. Again, past and present merge in Wynne's invention.

Wynne’s sixteen works in this show include punctuation marks—exclamation points, question marks—as well as insects, posed as notes of humor or allusions to the vermin at the heart of so much of United States history. We are urged throughout to stop and consider . . . and then to look at the huge glass teardrops mysteriously mounted in the last of the galleries and to take the measure of history today. Perhaps, Wynne suggests, all history, even our own, is a source of melancholy. All we have in a museum is a piece of the past, a pathetic fragment of a lost reality.

Wynne explains that his dramatic, glimmering work, Waterfall (2016), installed in the section headed, “The United States on the World Stage,” is based on Japanese woodblocks and their depiction of water. He hung it in relation to Albert Herter’s ca. 1923 painting, Pilgun Yoon, a portrait of the Korean actor who played Aladdin, which Wynne interprets as a reference to “harmony not only with the Asian influence in America, but the idea of positive globalization, as evidenced both diplomatically as well as artistically at that time in history.” Wynne ironically transforms the "new world" both into an old world and a world of his own.