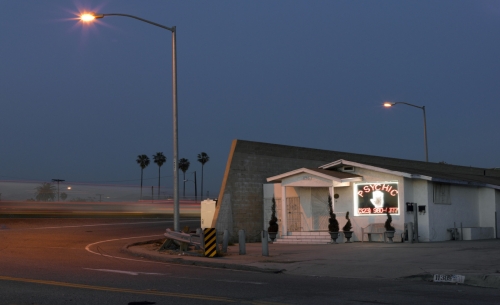 Did you know that the Self-Realization Fellowship [SRF] International Headquarters were so close by before you moved to Mount Washington? I did. I went to a dinner at a friend-of-a-friend’s house when I first started looking for houses, and they said, “If you want to move to Mount Washington, you should read this book,” and they gave me a copy of Autobiography of a Yogi.

Did you visit right after? Well, these were also the people who had been fighting the Self-Realization Fellowship for years because at one point there was a plan to bring [founder Paramahansa] Yogananda’s body to Mount Washington, to the Mother Center, and it caused a huge brouhaha with the neighborhood about the problems that could arise with traffic and the infrastructure and all this stuff. And the people who gave me the book were actually part of the group leading the fight against SRF. So there’s this huge tension in the neighborhood— offering the book wasn’t a beautiful gesture, like, “Here is this great place. Check it out.” It was more like, “You should know what the neighbors are doing.”

Have you ever gone to a psychic? I’ve been to many psychics.

Are there any great stories about visiting one or something that one told you? I did a project about psychics a few years ago where I photographed storefront psychics. I tried to get readings from them, but they were never open, so I asked friends for recommendations of psychics. I went to a bunch of different psychics for that project, and what was interesting to me was I felt like they were trying to read me, but at the same time they were using it as an opportunity to manifest their own ideas about the world in the world. They said, “You should go sit in nature amongst the trees,” and I thought, “They tell everybody this because that’s a great idea and they just want everybody to sit in nature.” So I wasn’t sure how specific the psychics actually were, but I enjoyed meeting them. And maybe I do need to spend more time sitting under trees.

Do you think there are any similarities between what a psychic does and what an art advisor does? I do, yes. Do you want me to tell you?

Yeah! I think that it overlaps at the point where both kinds of advisors are trying to manifest their own ideas in the world and also read what the client or person in front of them wants to hear. It feels like a kind of political action in the world, but one at a time—an audience of one. There’s an optimism that you can convince someone of anything, one person at a time.

Have you thought about doing this project before, the one you are doing at the back lot of Paramount for Frieze Projects? How much does the site have to do with your decision to present it there? When I first went on the back lot, I thought we needed a psychic there because so many of the psychics that I’ve photographed were in domestic or home locations. The brownstones are the perfect place for a psychic reader. In LA there are many of them in houses, but in New York they often occupy brownstones, such as those at Paramount, and apartment buildings on the first or second floor, so it just felt appropriate. I had also been doing a lot of projects around small, freestanding businesses in one way or another. I’ve been photographing these kinds of businesses for more than 10 years and more recently worked with other artists to open some in a backyard shack called The Meow. So I really wanted to put some sort of small business at the fair, and because of the location, a home business made sense. The connection between different kinds of advising and how there might be overlap between them felt interesting for this fair.

How are you selecting the advisors? How will it work? I have been working with a performance artist who knows a bit about both art and psychic practice and has an interest in tarot and other kinds of divination. We’ve been working together to create a character that will be the Psychic Art Advisor. That’s the main Psychic Art Advisor, and then there are other people who have expressed interest in dropping in for an hour or two—artists who also read tarot and who have a certain amount of intuition.

So will people ask specific questions, or does the advisor kind of take stock of who is in front of them and then start? No, you ask questions. The Psychic Art Advisor will help guide people to decisions relating to collecting, creativity and curating. So it will be for artists, curators and collectors—or for all three of those—to have their questions answered.

You mentioned your exploration and documentation of small creative businesses. Do you think that psychics fall into that category? Are they usually one person shows? Totally! Psychics are really amazing because you don’t have to have any sort of license or specialized education; you just throw up a sign, and suddenly you’re a trusted source. I really love that about this kind of business—that anybody can do it. It’s long been a practice that’s mostly been women, and I think art advisors are also primarily women, and it’s a little bit unregulated in terms of who can and cannot be an art advisor, so there’s a real democratic feel to both kinds of pursuits that I quite like.

There’s also this aspect of being able to master the art of getting people to trust you. Yeah, I think both are sort of like being a therapist or a hair stylist, but without having to cut hair or actually solve psychological problems.