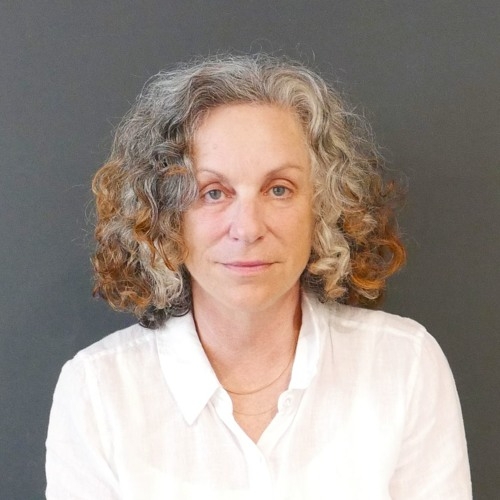 Walking the line between respectful homage and brazen appropriation, Deborah Kass mimics and reworks the signature styles of some of the 20th century’s most iconic male artists—including Frank Stella, Andy Warhol, Jackson Pollock, and Ed Ruscha—in her bold, meticulous paintings. “They’re my daddies,” she has said, in witty acknowledgment of her indebtedness to her male antecedents. Kass’s alterations of their work in her own paintings are both bitingly funny formal interventions and keenly critical commentary on the historically dominant position of male artists. Feminism is central to her approach. As she explains: “It is about my desire to be part of what they’re a part of. […] I think the desire was ambition and greatness. For women of my age, it was still not very cool to be overtly ambitious.”

Deborah Kass (born 1952) is an American artist whose work explores the intersection of pop culture, art history, and the construction of self. Deborah Kass works in mixed media, and is most recognized for her paintings, prints, photography, sculptures and neon lighting installations. Kass's early work mimics and reworks signature styles of iconic male artists of the 20th century including Frank Stella, Andy Warhol, Jackson Pollock, and Ed Ruscha. Kass's technique of appropriation is a critical commentary on the intersection of social power relations, identity politics, and the historically dominant position of male artists in the art world.

Deborah Kass was born in 1952 in San Antonio, Texas. Her grandparents were from Belarus and the Ukraine, first generation Jewish immigrants to New York. Kass’s parents were from the Bronx and Queens, New York. Her father did two years in the U.S. Air Force on base in San Antonio until the family returned to the suburbs of Long Island, New York, where Kass grew up. Kass’s mother was a substitute teacher at the Rockefeller Center public schools and her father was a dentist and amateur jazz musician.

At age 14, Kass began taking drawing classes at The Art Students League in New York City which she funded with money she made babysitting. In the afternoons, she would go to theater on and off Broadway, often sneaking for the second act. During her high school years, she would take her time in the city to visit the Museum of Modern Art, where she would be exposed to the works of post-war artists like Frank Stella and Willem De Kooning. At age 17, Stella’s retrospective exhibition inspired Kass to become an artist as she observed and understood the logic in his progression of works and the motivation behind his creative decisions.

Kass received her BFA in Painting at Carnegie Mellon University (the alma mater of artist Andy Warhol), and studied at the Whitney Museum Independent Study Program Here, she created her first work of appropriation, Ophelia’s Death After Delacroix, a six by eight foot rendition of a small sketch by the French Romantic artist, Eugène Delacroix.

At the same time Neo-Expressionism was being helmed by white men in the late Reagan years, women were just beginning to create a stake in the game for critical works. “The Photo Girls” consisted of artists like Sherrie Levine, Cindy Sherman, and Barbara Kruger. Kass felt that content of these works connected those of the post-war abstract painters of the mid-70s including Elizabeth Murray, Pat Steir, and Susan Rothenberg. All of these artists critically explored art in terms of new subjectivities from their points-of-view as women. Kass took from these artists the ideas of cultural and media critique, inspiring her Art History Paintings.

Kass is most famous for her “Decade of Warhol,” in which she appropriated various works by the pop artist, Andy Warhol. She used Warhol’s visual language to comment on the absence of women in art history at the same time that Women’s Studies began to emerge in academia. Reading texts on subjectivity, objectivity, specificity, and gender fluidity by theorists like Judith Butler and Eve Sedgewick, Kass became literate in ideas surrounding identity. She engaged with art history through the lens of feminism, because of this theory which “The Photo Girls” drew upon.

In 2012 Kass's work was the subject of a mid-career retrospective Deborah Kass, Before and Happily Ever After at The Andy Warhol Museum in Pittsburgh, PA. An accompanying catalogue published by Skira Rizzoli, included essays by noted art historians Griselda Pollock, Irving Sandler, Robert Storr, Eric C. Shiner and writers and filmmakers Lisa Leibmann, Brooks Adams, and John Waters.

Kass's work has been shown at international private and public venues including at the Venice Biennale, the Istanbul Biennale, the Museum Ludwig, Cologne, the Museum of Modern Art, The Jewish Museum, New York, the National Portrait Gallery, and the Museum of Fine Arts, Boston. A survey show, Deborah Kass, The Warhol Project traveled across the country from 1999–2001. She is a Senior Critic in the Yale University M.F.A. Painting Program.

Kass's later paintings often borrow their titles from song lyrics. Her series feel good paintings for feel bad times, incorporates lyrics borrowed from The Great American Songbook, which address history, power, and gender relations that resonate with Kass's themes in her own work.

In Kass's first significant body of work, the Art History Paintings, she combined frames lifted from Disney cartoons with slices of painting from Pablo Picasso, Jasper Johns, Jackson Pollock, and other contemporary sources. Establishing appropriation as her primary mode of working, these early paintings also introduced many of the central concerns of her work to the present. Before and Happily Ever After, for example, coupled Andy Warhol’s painting of an advertisement for a nose job with a movie still of Cinderella fitting her foot into her glass slipper, touching on notions of Americanism and identity in popular culture. The Art History Paintings series engages critically with the history of politics and art making, especially exploring the power relationship of men and women in society. Deborah Kass's work reveals a personal relationship she shares with particular artworks, songs and personalities, many of which are referenced directly in her paintings.

In 1992, Kass began The Warhol Project. Beginning in the 1960s, Andy Warhol’s paintings employed mass production through screen-printing to depict iconic American products and celebrities. Using Warhol’s stylistic language to represent significant women in art, Kass turned Warhol’s relationship to popular culture on its head by replacing them with subjects of her own cultural interests. She painted artists and art historians that were her heroes including Cindy Sherman, Elizabeth Murray, and Linda Nochlin. Drawing upon her childhood nostalgia, the Jewish Jackie series depicts actress Barbra Streisand, a celebrity with whom she closely identifies, replacing Warhol's prints of Jackie Kennedy Onassis and Marilyn Monroe. Her My Elvis series likewise speaks to gender and ethnic identity by replacing Warhol's Elvis with Barbra Streisand from Yentl: a 1983 film in which Streisand plays a Jewish woman who dresses and lives as a man in order to receive an education in the Talmudic Law. Kass's Self Portraits as Warhol further deteriorates the idea of rigid gender norms and increasingly identifies the artist with Warhol. By appropriating Andy Warhol's print Triple Elvis and replacing Elvis Presley with Barbara Streisand’s Yentl, Kass is able to identify herself with history’s icons, creating a history with powerful women as subjects of art. The work embodies her concerns surrounding gender representation, advocates for a feminist revision of art, and directly challenges the tradition of patriarchy.

America's Most Wanted is a series of enlarged black-and-white screen prints of fake police mug shots. The collection of prints from 1998–1999 is a late-1990s update of Andy Warhol’s 1964 work 13 Most Wanted Men, which featured the most wanted criminals of 1962. The “criminals” are identified in titles only by first name and surname initial, but in reality the criminals depicted are individuals prominent in today's art world. Some of the individuals depicted include Donna De Salvo, deputy director for international initiatives and senior curator at the Whitney Museum of American Art; Thelma Golden, director and chief curator of the Studio Museum in Harlem, and Robert Storr, dean of the Yale School of Art. Kass's subjects weren’t criminals. Through this interpretation, Kass show's how they are wanted by aspirants for their ability to elevate artists’ careers. The series explores the themes of authorship and the gaze, at the same time problematizing certain connotations within the art world.

In 2002, Kass began a new body of work, feel good paintings for feel bad times, inspired, in part, by her reaction to the Bush administration. These works combine stylistic devices from a wide variety of post-war painting, including Ellsworth Kelly, Frank Stella, Jackson Pollock, Andy Warhol, and Ed Ruscha, along with lyrics by Stephen Sondheim, Laura Nyro, and Sylvester, among others, pulling from popular music, Broadway show tunes, the Great American Songbook, Yiddish, and film. The paintings view American art and culture of the last century through the lens of that time period's outpouring of creativity that was the result of post-war optimism, a burgeoning middle class, and democratic values. Responding to the uncertain political and ecological climate of the new century in which they have been made, Kass's work looks back on the 20th century critically and simultaneously with great nostalgia, throwing the present into high relief. Drawing, as always, from the divergent realms of art history, popular culture, political realities, and her own political and philosophical reflection, the artist continues into the present the explorations that have characterized her paintings since the 1980s in these new hybrid textual and visual works.

In 2015, Two Tree Management Art in Dumbo commissioned of a monumentally scaled installation of OY/YO for the Brooklyn Bridge Park. The sculpture, measuring 8×17×5 ft., consists of big yellow aluminum letters, was installed on the waterfront and was visible from the Manhattan. It spells “YO” against the backdrop of Brooklyn. The flip side, for those gazing at Manhattan, reads “OY.” An article and photo appeared on the front page of the New York Times 3 days after its installation in the park. An instant icon, OY/YO stayed at that site for 10 months where it became a tourist destination, a favorite spot for wedding, graduation, class photos and countless selfies. After its stay in Dumbo it moved to the ferry stop at North 6th Street in Williamsburg, Brooklyn for a year, where it greeted ferry riders. Since 2011, OY/YO has been a reoccurring motif in Deborah Kass's work in the form of paintings, prints, and tabletop sculptures. Kass first created “OY” as a painting riffing on Edward Ruscha’s 1962 Pop canvas, “OOF.” She later painted “YO” as a diptych that nodded to Picasso's 1901 self-portrait, “Yo Picasso” (“I, Picasso”). OY/YO is now installed in front of the Brooklyn Museum. Another arrived at Stanford University in front of the Cantor Arts Center late 2019.

A large edition of OY/YO was acquired by the Jewish Museum in New York in 2017 and is on view in the exhibition Scenes from the Collection.

On December 9, 2015 Deborah Kass introduced her new paintings that incorporated neon lights in an exhibition at Paul Kasmin Gallery entitled "No Kidding" in Chelsea, New York. The exhibition was an extension of her Feel Good Paintings for Feel Bad Times, but it sets a darker, tougher tone as she reflects on contemporary issues such as global warming, institutional racism, political brutality, gun violence, and attacks on women's health, through the lens of minimalism and grief. The series is ongoing.

Deborah Kass is married to artist Patricia Anne Cronin in July 2011. Cronin is a professor of art at Brooklyn College. She graduated from Rhode Island College, got and MFA in painting from Brooklyn College, and studied at both the Yale Summer School of Art and Music and the Skowhegan School of Art. 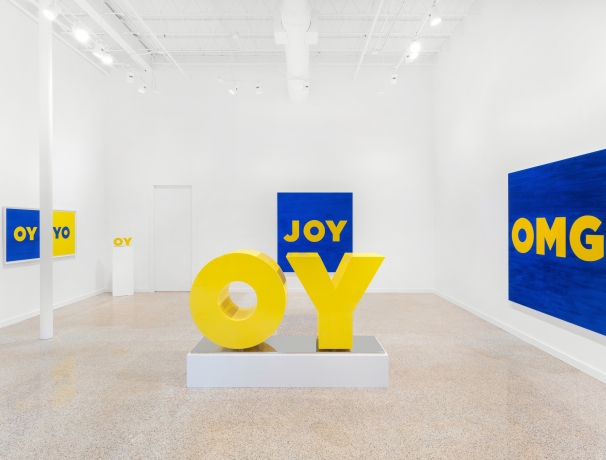 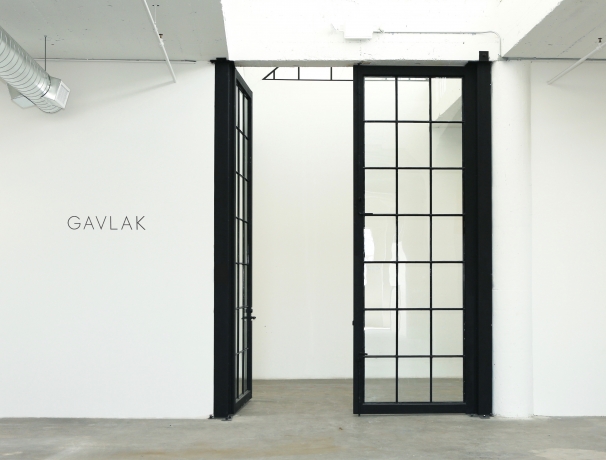