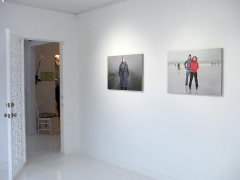 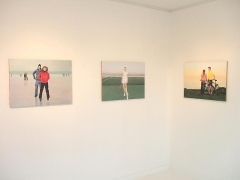 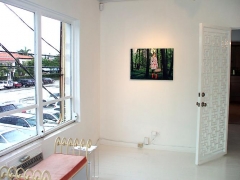 In 1979 Ridley Scott made three television commercials for Chanel No. 5 perfume. In keeping with the haunting, austere and surreal sensibility of his movies Alien and Blade Runner, the most famous of the three ads begins with the shadow of a jet flying over the large blue swath of a Mediterranean swimming pool. At one end of the pool recumbent in classic odalisque pose is a woman wearing only a black bikini bottom (it is the Cote d’ azure after all) and on the other end is a very tanned Adonis man who magically appears in a similar black bikini. He dives in only to resurface at the feet of our mystery woman. This is the moment the narrator states the best tagline ever to be invented: “Share the Fantasy, Chanel No. 5”. Then the fantasy would be immediately and abruptly interrupted by a second voice-over of someone directing you where you could purchase the fantasy, bottle of perfume “now available at Gimbles, Kauffman’s, etc.” It was a cruel but necessary jolt back into reality for a mid-west suburban girl of barely ten years…

The advertising reference is apt here in regard to the work of two young painters whose work is similarly influenced by fashion, film, advertising and the media frenzy that has grown around fashion today. While both Rachel Kaye (b. 1981, USA) and Irina Melsom (b. 1972, Norway) use images from glossy fashion and lifestyle magazines both past and present, their styles of paintings and respective cultural backgrounds produce very different results.

In her new series “The Promise of Leisure”, Norwegian born, London based painter Irina Melsom explores the theme of recreation and leisure activities and the nature of seduction in movies, fashion and banal commercial photography. By focusing on ”repetition, patterns and neutral poses, the series is meant to create symbols of visual desire or utopian scenes where everything seems ‘perfect‘, and where human emotions and moods are reserved and controlled – as a ‘promise of leisure‘”. Her canvases have the haunting, dark and dramatic atmosphere of 19th Century Scandinavian Romantic painting. Her figures are obviously and awkwardly staged and resemble religious icons, Indian miniatures or even more generic images of “ice skaters”, “mountain bikers,” and a “tennis player” one would find in searching Goggle images. Melsom finds these figures, models and every day people online, in books and magazines and then “collages” in Photoshop to “sketch” the layout of a painting. The effect is Bergman-esq, a neutrality of emotion, a flatness of light, and an emotional distance on the faces of the subjects that renders the usual psychological reading associated with portraiture impossible.

Irina Melsom received her MFA from The Art Institute of Chicago (2001). She has had solo exhibitions at Galleri LNM, Oslo (2006) and Tromsø Kunstforening, Tromsø (2005). Her work has been included in group exhibitions at Standard, Chicago, Donald Young Gallery, Chicago, ARCO, Madrid, Gavlak, Palm Beach, and The Stenersen Museum, Oslo, Norway. Melsom currently lives and works in London.