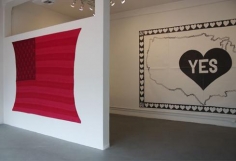 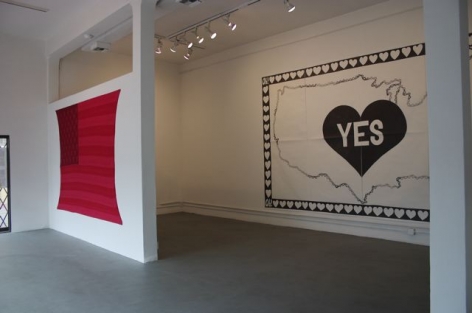 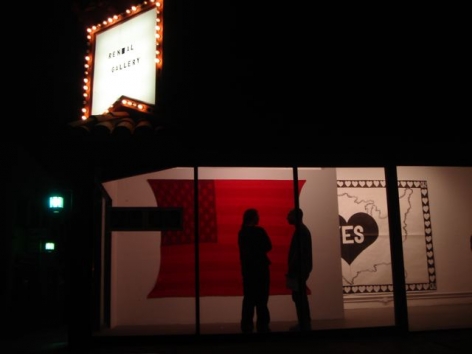 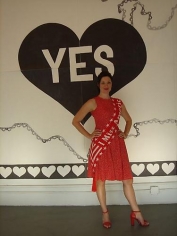 Happy Fourth of July America!! This year we are celebrating our freedom and independence from tyranny and colonization by; colonizing another country, debating freedom of expression, and attempting to do away with fundamental civil rights. In addition we are celebrating this great nation with all the pageantry and pomp of a grand ol’ art show! The exhibition “Miss America” held at the Rental Gallery in Chinatown, Los Angeles, Miss Sarah Gavlak presents the works of two artists, Lisa Anne Auerbach and Aleksandra Mir, who while working completely apart and mostly unaware of each others’ practice, overlap on many formal and conceptual levels. Beginning with the two images used on the poster for the exhibition, where both artists are pictured “speaking softly” (as girls are supposed to be “seen and not heard”) yet carrying very big sticks, or in the case a fully automatic weapon and a military tank. These two Misses are doing feminism and taking on the patriarchy in a smart, sexy, provocative way like no one. The works produced for this show are not a collaboration but rather three distinct pieces plus a selection of publications, brought together here to show the theoretical thread that is woven, knitted and drawn between the two artists’ way of looking at the world and producing visual culture.

Why “Miss America” and not Ms. or Mrs. America? What exactly is the status of Miss America these days? Is she the Marilyn Monroe, smart, sexy, sultry star with iconic red lips who we eventually had to kill off because we were so afraid and threatened by her un-explainable power? Or is Miss America the sorority sister of the “Tri-Delts” keeping their secret pledges behind a federal architectural façade as captured in Auerbach’s color photograph? Or is she Lady Liberty, welcoming (sometimes) certain people to our shores who will not take jobs away from our own kind. Or is Miss America simply an average lady who is trying to sort through current gender etiquette while attempting to achieve economic and political equality while still retaining her “femininity”? In a cultural climate of ultra-conservativism, does it make sense to go backward to an era where young ladies were “Miss” until they graduated and earned their Mrs.? The taking back of the title Miss is similar in strategy the gay, lesbian and trans gendered use of the word queer. Once the pejorative term ascribed to this class of sexual preference in society, the post-stonewall generation has re-appropriated both the term and the Nazi pink triangle used in the camps to denote homosexuals. The label queer is now in the lexicon for good not bad.

So why not Miss? I miss Miss, do you? Miss may be more difficult to take back and make positive, but we are going to try. Why should Ms. be the ambiguous title which represents the status of a woman’s betrothal or lack there of? Is it any one’s business if she Miss(ed) the wedding boat? In this day and age, why is it even important to reveal or conceal such a status? Why even the grand dame of pre-feminist, feminine female-ness Miss Elizabeth Taylor was married 8 times and yet until the day she was deigned “Dame” by the HRH Queen Elizabeth, she remained Miss Elizabeth Taylor.

Like Dame Liz who proudly wears a red ribbon, and who was the first to bring the AIDS crisis to the attention of President Regan and the rest of the world, Lisa Anne Auerbach is equally passionate about the color red. She wants it back! In a scarlet letter to the world, Auerbach has channeled her inner Betsy Ross and written a cherry manifesto for whores everywhere to take back the color of love and lust, blood and beets from the right. This could be the solution to the big flag burning debate which continues to rage on capital hill. Why burn the flag when you can knit one entirely of various crimson shades and replete with incendiary text?

In stark contrast to the red flag debating the sad state of red verses blue states is Aleksandra Mir’s giant black and white map of the Untied States. A black and white sharpie drawing completely devoid of red or blue states is all lace and finery with the borders of this once great nation rendered in a frilly outline and the entirety of her contours framed by optimistic hearts. The only reference to red are these candy coded hearts, that romantic decorative symbolic ode to a kinder, gentler America that I miss. The point driven home even harder by the large single heart in the middle of the red state dominated heartland with a resounding “YES” and four “Oh” exclamations on the four corners. “Oh yes” you have come a long way baby! “Oh yes, oh yes, oh yes, oh yes! Here she cums, Miss America”.

In various of the many publications that Auerbach and Mir have self-published over the years, many of these “Miss America” issues, from extreme religion (The Church of Sharpie, 2005, Mir) to the semiotics of homemaking (American Homebody, 1994-2005) are humorously and seriously investigated. A selection of these publications is contextualized around the political and cultural themes of Miss America and on display for your reading pleasure.