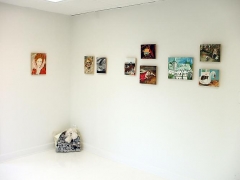 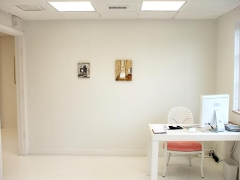 In 1979 Ridley Scott made three television commercials for Chanel No. 5 perfume. In keeping with the haunting, austere and surreal sensibility of his movies Alien and Blade Runner, the most famous of the three ads begins with the shadow of a jet flying over the large blue swath of a Mediterranean swimming pool. At one end of the pool recumbent in classic odalisque pose is a woman wearing only a black bikini bottom (it is the Cote d’ azure after all) and on the other end is a very tanned Adonis man who magically appears in a similar black bikini. He dives in only to resurface at the feet of our mystery woman. This is the moment the narrator states the best tagline ever to be invented: “Share the Fantasy, Chanel No. 5”. Then the fantasy would be immediately and abruptly interrupted by a second voice-over of someone directing you where you could purchase the fantasy, bottle of perfume “now available at Gimbles, Kauffman’s, etc.” It was a cruel but necessary jolt back into reality for a mid-west suburban girl of barely ten years…

The advertising reference is apt here in regard to the work of two young painters whose work is similarly influenced by fashion, film, advertising and the media frenzy that has grown around fashion today. While both Rachel Kaye (b. 1981, USA) and Irina Melsom (b. 1972, Norway) use images from glossy fashion and lifestyle magazines both past and present, their styles of paintings and respective cultural backgrounds produce very different results.

New York based artist Rachel Kaye paints in an almost naïve, expressionist style, with thick brush strokes that render a monochromatic painting of a Chanel No. 5 perfume bottle a study in black, white and grey brush strokes in the manner of Franz Klein. Much in the same manner that Jean-Etienne Liotard created portraits of the Habsburgh-Lorraine family, Kaye culls images of recognizable celebrities, actors, models, socialites from as recent as Cate Blanchett dressed as Elizabeth I, and other subjects with “large personalities” whom she considers the “royalty” of our day. Images appropriated from the 1960’s photographer Slim Aarons among others who chronicled “The Good Life” of the rich and famous become the narrative thread through Kaye’s installations of small paintings, watercolors, drawings and sculpture. Kaye’s influences range from Karl Lagerfeld and Rococo painting to the “period room” installations of contemporary artist Karen Kiliminik.