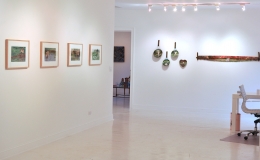 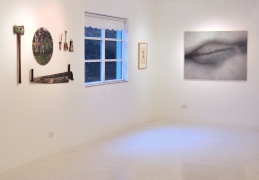 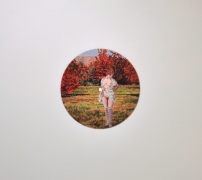 
Gavlak Gallery is pleased to present our first solo exhibition with New York based
painter Betty Tompkins. Included in the exhibition are paintings and works on paper
from 1976 through 2013, including works on found objects and vintage book pages
as well as the explicit photorealistic paintings that have recently attracted much
international attention.

Tompkins was an important figure in the photorealist movement of the 1970's but
largely overlooked due to the fact that she was a woman making large-scale paintings
of heterosexual intercourse, imagery that until then had been reserved for male
artists and viewers. These paintings made between 1969 and 1974 were practically
unknown when they were exhibited together for the first time in New York in 2002
and immediately broadened the art historic canon of female identified imagery.

For her exhibition with Gavlak Gallery, Tompkins is showing works that range from
early sketches for paintings to now iconic "Cunt" paintings that in a more abstract
manner recall Courbet's "L'Origine du Monde". Also included is a series of "soft
core" works from 1996 - 2000 that are less graphic yet provocative paintings of
women in various stages of dress painted onto everyday found tools and book pages.
Selecting common hand saws, shovels, axes, baking pans, and cake servers, quotidian
objects that are assigned along gender lines of domestic work and construction work
are painted with titillating scenes of women frolicking about in a lake, or simply
posing in nature. Again recalling more erotic art historic subjects painted by
Boucher through Courbet of women alone or in pairs in their private quarters or
under a tree in repose "napping" together or reading, imagery that in the past were
reserved for male pleasure. While it may be taken for granted today that women artists
make transgressive and explicit sexual imagery, Tompkins' sexual paintings were
at the forefront of the feminist movement. This discourse by women artists and philosophers
addressing issues of female subjectivity and ownership of sexual imagery for their
own desire and pleasure continues to be challenged and explored today by women in
art and popular culture. 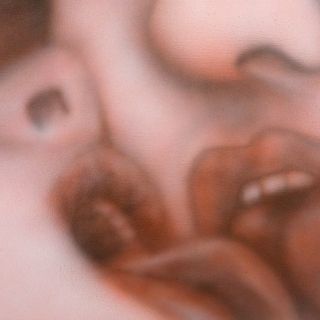