Stains on a Pretty Landscape, 2019 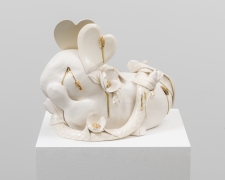 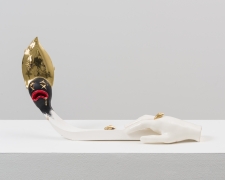 Book an appointment to come see the show before it closes on July 11th!
SCHEDULE AN APPOINTMENT

At the core of Anderson’s current body of work is a philosophical, existential examination of identity politics; based in Los Angeles, the 30-year old gay, Asian-African American sculptor is an artist working against stereotype and racialism rapant in today’s society. By working in an unexpected medium and channeling methodologies surrounding artistic production in ceramic arts, Anderson manages to create fantastic, multifaceted sculptures that are both subversive and whimsical at the same time. Alex Anderson uses the classical aesthetics of western power, which ironically share space with the aesthetics of queer camp cultural production, to translate the structures that govern his lived experience in society and others’ social perceptions of his identities into form. While his work engages with the ceramic canon and draws from the western art historical canon at large, it primarily operates at the core of Post-Blackness.

Anderson’s method of production directly corresponds with current aesthetic and artistic practices and ideologies surrounding theories of Post-Black art. Working at the intersection of identity politics and aesthetic empowerment, Anderson’s ceramic creations appear charming and playful, but their frivolity is only glaze-deep. The artist’s work layers conceptions about blackness, masculinity, and perception, folding them onto one another until they become inextricably fused together, reciprocating the merging of his own personal lived experiences, historical inheritance, and conscious self-awareness as his artistic point of departure.

Criticality, political derision, and gender politics all become relevant schematics for Anderson’s sculptural oeuvre. Each of his identities has a history of marginalization, received violence, and fetishization and a contemporary story of their rise to power through assimilation and mastery of the white, western systems that continue to mediate society today. His work gives form to the realities, stereotypes, and social perceptions of each identity he lives and the complex aporic spaces they create between one another. Anderson seeks to create a metaphorical world of objects that distills his understanding of what it means and how it feels to live at the intersection of identities, and his resultative place in the contemporary social world.

The idea of blackness as a concept and culture in its own right also informs how the artist engages with the other identities that comprise his larger self. The freedom of not having to confine his content into a narrow, deterministic view of what the art of a certain identity looks like also extends to the manner in which he is able to express his Asian and gay identities in his practice.

Anderson lives in a black body, complicated by its containment of the African-American, Japanese, and gay identity politics respective to his multifarious backgrounds. Each of these identities has a history of marginalization, received violence, and fetishization; all of the artist’s inner selves represents a contemporary story of their rise to power through assimilation and mastery of the white, western systems that continue to mediate society today. Anderson’s ceramic sculptures give form to the realities, stereotypes, and social perceptions of each of his  identities and the complex aporic spaces they create between one another.

These aforementioned social structures take literal form in the physical structures of Anderson’s work. The white and gold leitmotif and the visual language of Western, European Baroque luxury guides the format the artist employs to express his content. There are both human and inanimate components in each of his sculptures. Anything we can perceive as being alive in each work navigates a rigid, severely perfectionist, white, opulent, and superficially beautiful system grounded in the histories of Western power as a parallel to the artist’s engagement with the structurally white world we all occupy. These forms and the ceramic medium itself index to the early imperialism that created the social, cultural and political constructs we continue to navigate today. Imperialist nations traded ceramics sourced from Asia the same way they traded African slaves;  these objects were ultimately consumed by the elite and aristocratic Europeans who today embody the visual affect of femininity, gayness and camp. The work is intersectional and implacable in any specific world other than the one created by Anderson’s position as an artist. Subscribing to the Bourdieusian theory that art is the practice of artists taking unique positions in history, Anderson posits his own identity and experience in relation to a greater social whole. Bourdieu's work was primarily concerned with the dynamics of power in society, especially the diverse and subtle ways in which power is transferred and social order is maintained within and across generations. In conscious opposition to the idealist tradition of much of Western philosophy, his work often emphasized the corporeal nature of social life and stressed the role of practice and embodiment in social dynamics. Anderson, as a post-black, post-Civil Rights artist continues his ancestral tradition of challenging the defamatory and injust, white patriarchal systems he currently inhabits in order to occupy and subvert them in a way that leaves an undeniable mark on contemporary, visual art.

The larger Post-Black canon allows for his work to begin to establish itself as a unique position that speaks to his own truth, offering one perspective of the multivalent experience of contemporary black hybridity. As curator at the museum and author of the Freestyle exhibition catalogue essay most famous for its assertion that: “Post-Black is the new Black;” Thelma Golden provides a definitive culturally-sound initiative for Post-Black artists: art as that which includes artists who are “adamant about not being labeled ‘black’ artists, though their work was steeped, in fact deeply interested, in redefining complex notions of blackness.” She continued, “They are both post-Basquiat and post-Biggie. They embrace the dichotomies of high and low, inside and outside, tradition and innovation, with a great ease and facility.”

In this vein, Anderson’s  work acknowledges histories of adversity and mobility, but ultimately asks and attempts to offer an answer to the question “so, now what?” “What are we now that we can access the heights of a society seeped in not only black, but also Asian and gay blood, built to disenfranchise us?” The answer his work offers is that he is what he calls ‘an interloper:’ a staid, but uninvited presence in white society positioned by privilege and the social commodities that counter the negative social positioning his identities invite within our social paradigm. Imagery once used to deride takes re-contextualized form as culturally conceptual symbols and signs that comment on the imagery itself and its social context. Anderson’s  chosen content and visual aspect tends toward absurdity to the extreme, in order to reflect the social dogmas of his lived experience. Each work is an instantiated approach to saying, “This is what it’s like. And so is this. And so is this.”

For more information or for press inquiries, please contact Sarah Lewiecki at 323-467-5700 or slewiecki@gavlakgallery.com. 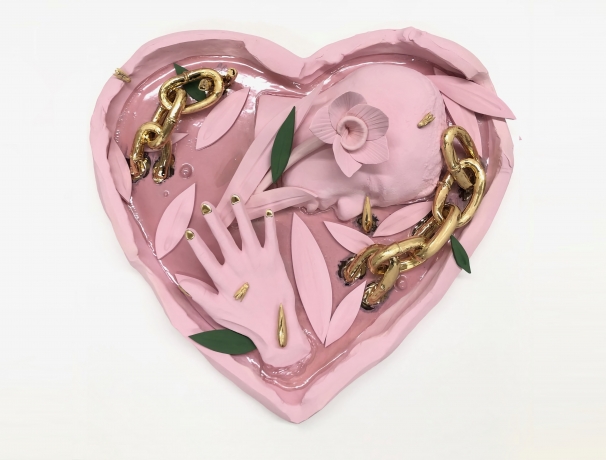 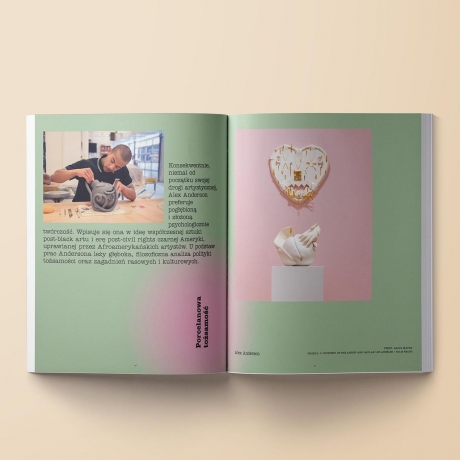 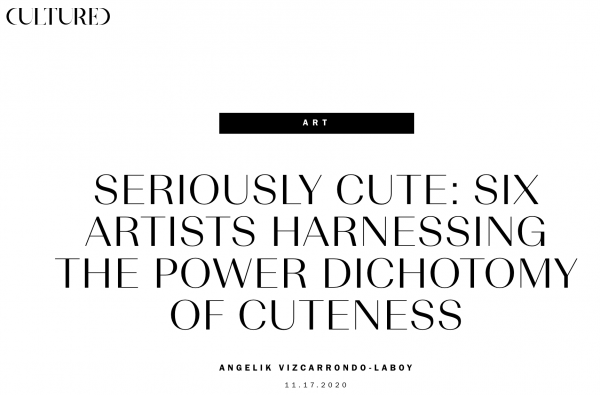 Cuteness is the first aesthetic most of us encounter in life. We are exposed to it as babies, through consumer goods, even before we are conscious of what we are seeing. Simply defined, a cute object is typically one that resembles a baby human or animal. Anthropomorphism, a strategy used since antiquity to make others, including gods, more relatable to humans, is key to cuteness’s effectiveness and requires very little to be successful. The gesture of a face combined with soft textures, rounded forms and cheerful colors produces a tender and vulnerable feeling that inspires the desire to care for and protect. Cute objects are compelling because they are approachable, but, more importantly, because they can be possessed. 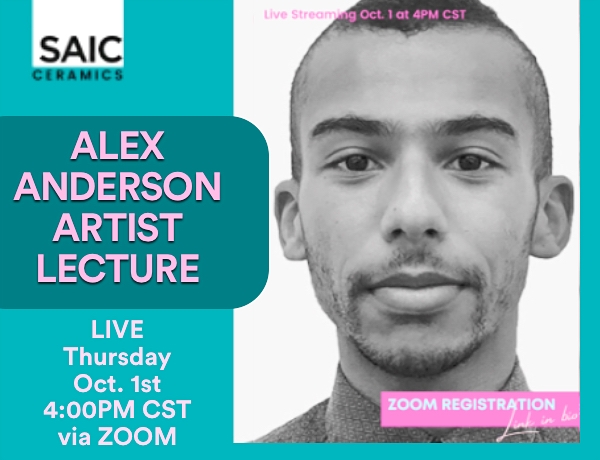 Registration link to attend inside.

School of the Art Institute is excited to welcome artist Alex Anderson into our ceramics department this week to give a lecture this forthcoming Thursday, October 1st at 4:00 CST.

My life right now... and forever is being an artist. This is what it means for me to be an artist today. 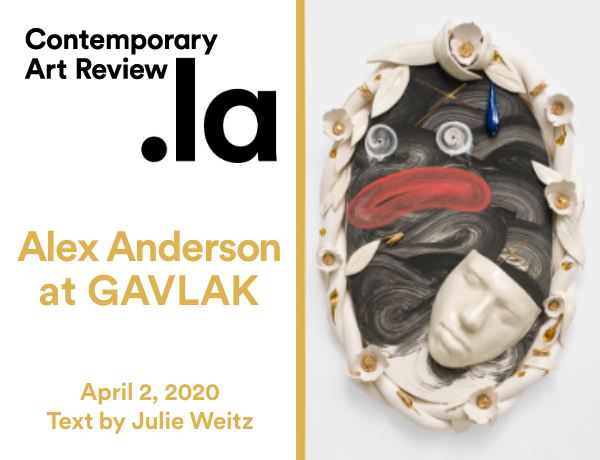 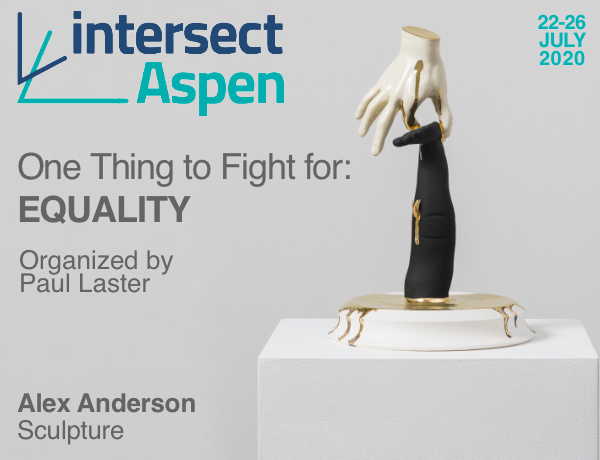 One Thing to Fight for: Equality 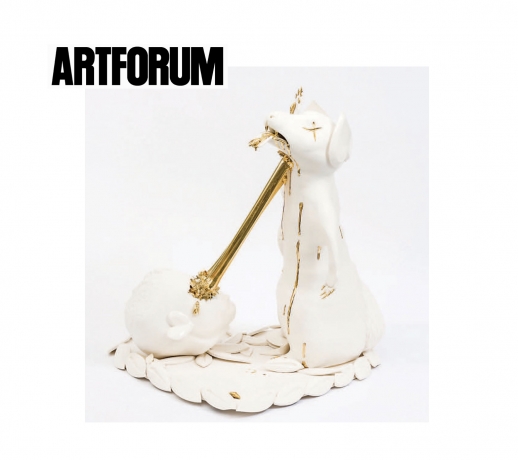 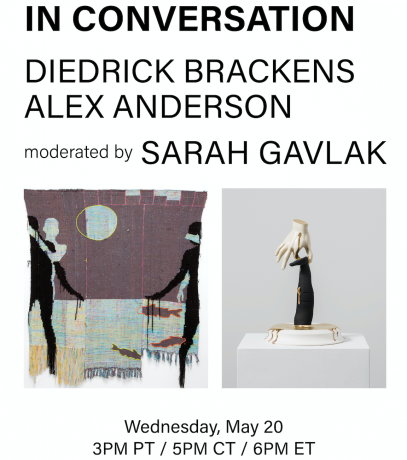 Wednesday, May 20th at 3PM PST