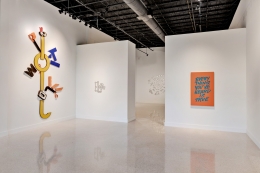 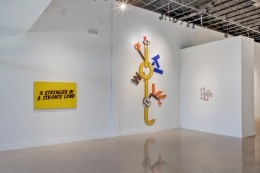 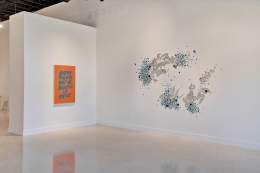 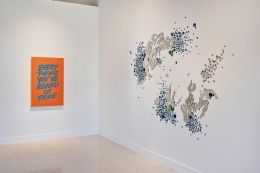 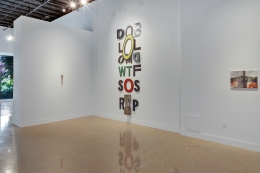 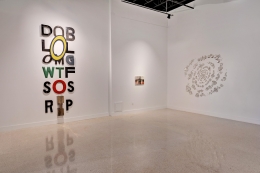 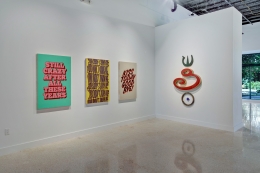 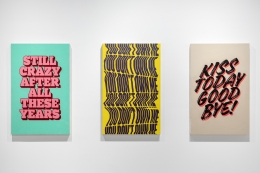 Gavlak Palm Beach is pleased to present “The Thing Itself”. A group exhibition featuring text based and abstract works by Andrew Brischler, Jack Pierson and Rob Wynne. The title of the show is attributed to the William Carlos William’s coined term “no idea but in things” becoming the mantra for poetry in the 20thcentury. Williams  held a distinctly unique style, experimenting with poetry to invent an entirely fresh, singularly American poetic. The accessibility of his language use centered on subject matters that were of the common place. Resonating with our exhibiting artists, abstracted and object-based artworks are used to create visceral experiences by triggering associated imageries. Using expressions from everyday life, each artist contributes a unique style influenced by contemporary culture.

Rob Wynne works made of glass, glitter, and beads, are lyrical poetry in motion - glossy and gleaming. Through poured and mirrored text and abstract installations, Wynne encapsulates fleeting moments of exhaled breath and meditative spaces. His hand-beaded drawings on vellum, each of which take upwards of fifty hours to complete, are an intimate counterpoint to the poured glass works. Adding to his repertoire of material use, Rob’s liquifying, velvety bronze “!” adds a playful emphasis to this group exhibition.

Andrew Brischler (born 1987) lives and works in Brooklyn, NY. He earned his BFA in Painting and Drawing at SUNY New Paltz in 2009 and his MFA at The School of Visual Arts in 2012. His work has been included in numerous exhibitions throughout the United States and Europe with recent highlights that including When We Were Young: Rethinking Abstraction, University Art Museum, New York, 2017; Lonely Planet Solo Exhibition, Gavlak, Los Angeles & Palm Beach; Sharper Image, Present Company, New York, 2017; Pointed Remark, Feuer Mesler, New York, 2017; Re(a)d, Nathalie Karg Gallery, New York, 2015; The Arts Club, London, 2014 and Painting:A Love StoryContemporary Arts Museum, Houston, 2014. His work is in the collection of The Norton Museum of Art, West Palm Beach, FL. Brischler has been featured in numerous publications, including Architectural Digest, 100 Painters of Tomorrow (Thames & Hudson, 2014), Modern Paint (Blouin Media, 2014).

Rob Wynne (born 1950) lives and works in New York City. He has had numerous group and solo exhibitions throughout the United Stated and internationally including, most recently Float at The Brooklyn Museum, New York open until March 3. Wynne has also been commissioned a large-scale installation for the re-opening of the newly renovated Norton Museum of Art in West Palm Beach, FL. His work has been featured at the McNay Art Museum, TX; P.S.1 Institute for Contemporary Art, NY; The Drawing Center, NY; and the Museum of Fine Arts, Boston, MA. Wynne's work can be found in the collections of the Whitney Museum of American Art, NY; The Museum of Modern Art, NY; Philadelphia Museum of Art, PA; Centre Pompidou, France; The Norton Museum of Art, FL; the Columbus Museum of Art, OH; and the Bibliotheque Nationale de France, Paris. 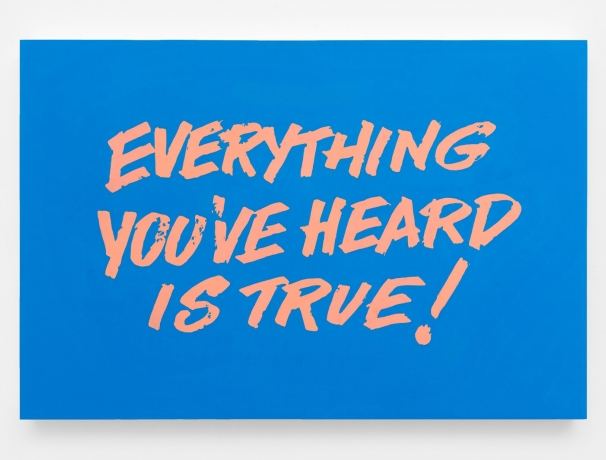 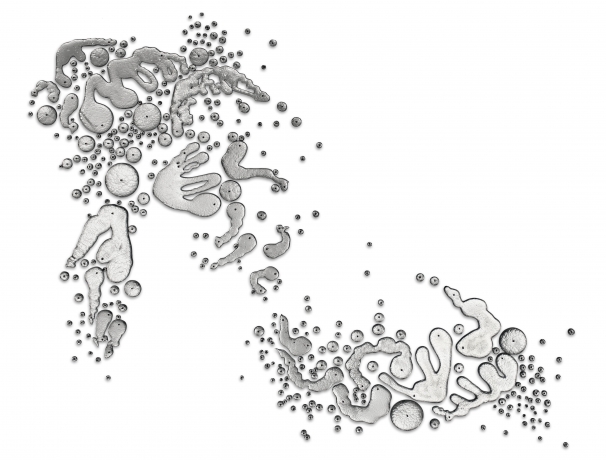 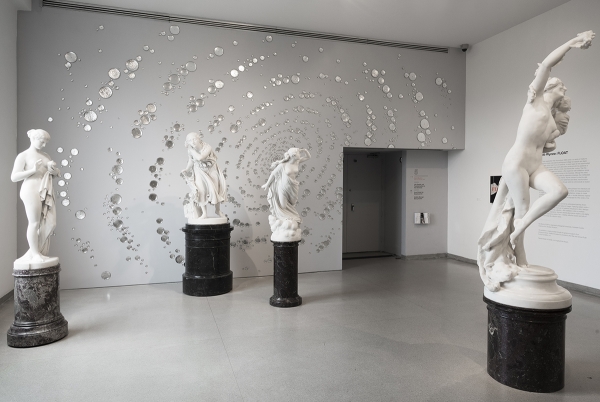 In his intriguing, often provocative, interpolated show at the Brooklyn Museum, Rob Wynne builds, reflects, and—more literally—reflects on connections in American art. In doing so he manages to intervene in the course of art history itself. He pulls at the museum's paintings and sculptures and activates them through light and language, transmuting the collection by means of his signature hand-poured, mirrored glass. 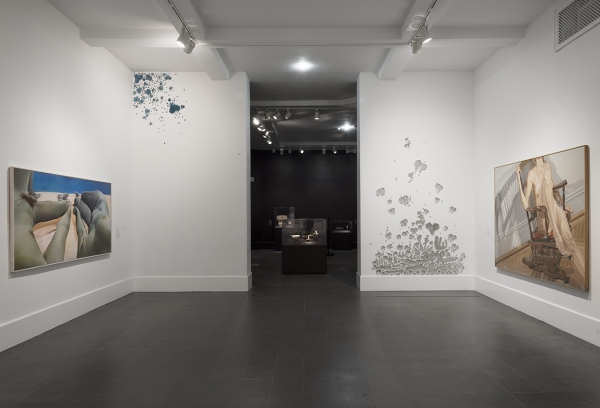 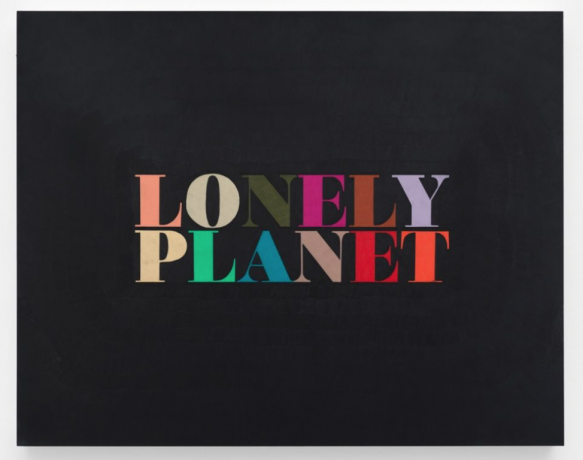 He’s disarmingly genteel, light, an effortless conversationalist, and endearingly candid. Like if Katy Perry and Prince Eric (from The Little Mermaid) had a lovechild. It’s official. Andrew Brischler is the closest thing you get to saccharine with a pulse. Yet, with razor-sharp execution, his paintings and color-pencil drawings are raw, undulating, boldly unflinching glimpses into the visual modalities with which we process words and shapes: loud colors, geometric tessellations, and surreal motion. 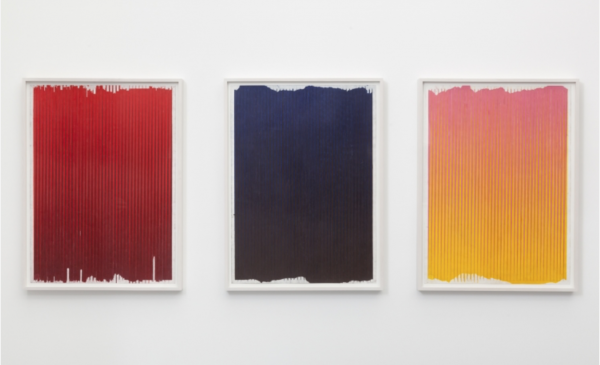 This major exhibition of new works by Brischler will take place simultaneously at both the Los Angeles and Palm Beach, Florida, galleries. This is the artist’s fourth solo presentation with the gallery. For this series, Andrew Brischler creates bold, energetic works on paper and panel using almost exclusively colored pencils. 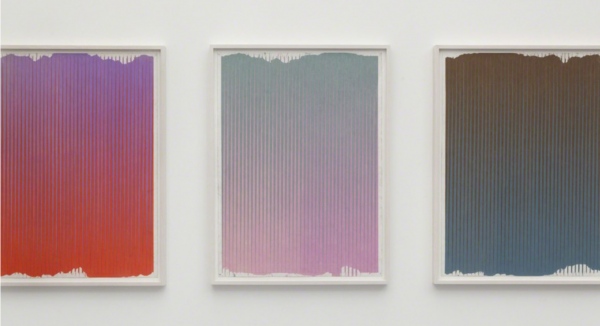 Gavlak is proud to present Lonely Planet, a major exhibition of new work by Andrew Brischler that will take place simultaneously at both the Los Angeles and Palm Beach galleries. This is the artist’s fourth solo presentation with the gallery. 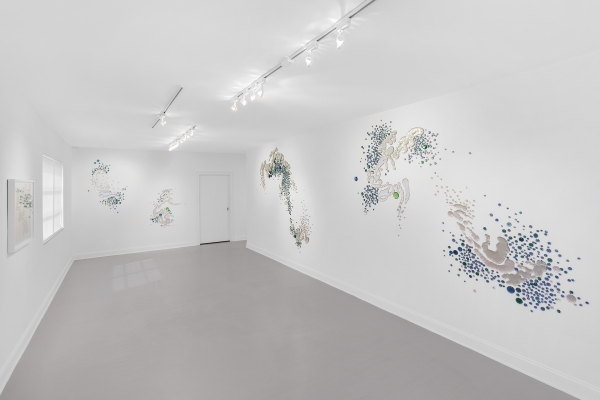 I wanted to try it so they suited me up and I held a ladle and scooped some molten glass that was really heavy and promptly flipped it over and dropped it on the floor. They were all explaining to me what I had done wrong but I was mesmerized by the piece I dropped as it started to cool and form and had this nice dimpling texture to it. I saved this, and it became my first piece.”